CBD / Cannabidiol was made aware to more of us, when this plant chemical halted an epileptic seizure in its tracks on U.S. national television.

Since then CBD has been claimed to stop spasms, calm anxiety, and soothe those in chronic pain.

What is CBD and how does it work? How is it different from THC?

Please use the FAQ / Infographics to further understand the helath benefits of CBD.

Cannabidiol (CBD) is one of the most prevalent chemical compounds in the cannabis plant. Unlike the more famous molecule, tetrahydrocannabinol (THC), CBD is completely nonpsychoactive.
Don’t expect to get “high” off of this organic chemical, however. CBD is all relaxation without intoxication.
While CBD still has an effect on your body, consuming CBD by itself isn’t going to send you on the cerebral adventure associated with THC. For decades, medical professionals and the general public overlooked CBD because psychoactive cannabis took center stage.
Now, the medical potential of CBD has taken cannabis to mainstream audiences. Preclinical trials over the past four decades have found that the cannabinoid shows promise as an:
anti-inflammatory
antioxidant
neuroprotectant
anxiolytic
antidepressant
analgesic
anti-tumoral agent
anti-psychotic
CBD is often used by patients in the form of an oil. Patients with more chronic conditions such as cancer and epilepsy often use medical cannabis oil extracted from high-CBD varieties of cannabis.

How does it work?

THC is psychoactive while CBD is not. While both compounds are cannabinoids, they each interact with the body in different ways. THC directly engages the cannabinoid receptor 1 (CB1), which is concentrated largely in the central nervous system.
CBD, however, doesn’t engage CB1 in the same way. As explained by neurologist and medical researcher Dr. Ethan Russo in an interview with Project CBD:
[CBD] doesn’t tend to bind directly to what’s called the orthosteric site [on cannabinoid receptors] where THC binds. Rather, it binds on what’s called an allosteric site, another site on the receptor, and so it alters the binding of both THC and the endogenous cannabinoids, the endocannabinoids.
So, what’s the verdict in a THC vs. CBD mashup? CBD and THC both connect on receptors in different locations. While THC directly engages the cannabinoid through the orthosteric site, CBD seems to regulate or fine tune that interaction by connecting to a separate receptor location.
This fact is perhaps what enables CBD to modulate the psychoactivity of THC. Simply stated, if you’re feeling a little anxious after some cannabis, it could mean too much THC and not enough CBD. Evidence suggests that CBD reduces the psychoactive high from THC.
As Russo suggests, CBD also alters the ability for the body’s own endocannabinoids to engage with the primary binding site. This is theorized to alter “endocannabinoid tone”, which could be quite beneficial for certain medical conditions.
In a 2008 paper, Russo hypothesizes that some people may experience an “endocannabinoid deficiency”. He speculates that this deficiency is one of the culprits behind migraine, irritable bowel syndrome, and fibromyalgia.
Should more trials of CBD show positive results, the cannabinoid may prove to be a powerful, therapeutic tool for conditions related to the ECS.

How else does CBD work?

There is still much to learn about CBD. However, scientists have discovered that the compound does a lot more than engage cannabinoid receptors. The effects of CBD in the body are broad and far-reaching. Thus far, the cannabinoid is known to also directly or indirectly affect the following:
Vanilloid receptors (important for pain modulation)
Adenosine receptors (important for the sleep-wake cycle)
Serotonin receptors (important for mood and stress management)
Some rodent studies suggest that CBD may also work by blocking a particular fatty acid known as fatty-acid amide hydrolase (FAAH). The enzyme that’s responsible for breaking down the naturally occurring endocannabinoid anandamide in your body.
Anandamide is also known as the “bliss molecule” or the human THC. It helps regulate basic functions like pleasure and reward, appetite, ovulation, memory, sleep, and pain.
The oversimplified theory was that with nothing to break anandamide into smaller parts, CBD boosts the amount of this chemical in your system. In some cases, this could theoretically improve endocannabinoid tone.
However, a 2015 study published in the Journal of Biological Chemistry suggest that CBD does not inhibit FAAH in humans. Rather, they suggest that the compound engages proteins that bind anandamide to FAAH, not to FAAH itself. Regardless, the cannabinoid is still linked to a spike in the bliss molecule. However, how it achieves this is unknown.

The therapeutic value of CBD is almost unbelievable. For decades, outdated laws have banned a plant that produces what may become one of the most important medicines for modern disease.
CBD is polypharmacological, meaning that it can affect multiple different pathways in the body at once. This makes it extremely difficult to study, as it is almost impossible to tell what effect these different interactions have upon each other. However, regardless of a lack of high-quality human trials, many medical cannabis patients find relief with this calming cannabinoid. Here are a few of the common reasons patients use CBD:
Cancer
Diabetes
Lupus
Motor disorders
Nicotine addiction
Parkinson’s Disease
Chronic and neuropathic pain
Obsessive Compulsive Disorder
Osteoporosis
Various pediatric conditions

As the anecdote about Charlotte Figi has hopefully made clear, the endocannabinoid system may play a key role in the future treatment of epilepsy. Recently, a British pharmaceutical company, GW Pharmaceuticals, has had successful phase III trials with a pure CBD medication for epilepsy.
The drug is named Epidiolex, and it has already shown favorable results for patients with Dravet syndrome and Lennox-Gastaut syndrome.  In other research, CBD has been found to increase the efficacy of other common anti-epileptic drugs and is known to be neuroprotective. In theory, this helps keep brain cells healthy and reduces cell damage.

The topics of schizophrenia and psychosis have long been major points of contention in cannabis medicine. You might find it surprising, then, that CBD is anti-psychotic. A 2015 review published in Schizophrenia Research suggested that CBD’s ability to reduce the psychoactive qualities of THC may also be helpful for schizophrenia patients.
THC affects brain regions like the hippocampus and prefrontal cortex. The THC activity in these regions is thought to contribute to the herb’s psychoactive effects. Incidentally, these brain regions are also implicated in schizophrenia. The review suggests that it is possible that the opposite effects of CBD and THC in this region could provide a new window into new schizophrenia research.
Coupled with traditional medication, early trials with CBD as a supplemental treatment for schizophrenia were successful with an impressive safety profile. The potent anti-inflammatory properties of CBD may also lend to its anti-psychotic properties. Psychosis has been linked to increased inflammation in the brain.

Has consuming marijuana ever made you feel more anxious? Well, the problem might be too much THC, not enough CBD. As mentioned above, CBD and THC work opposite of each other. One is a stimulating psychoactive, the other a compound that works to quell unnecessary psychoactivity.
Though THC is known to cause paranoia, CBD is an excellent option for the canna-curious who are nervous about a psychoactive experience.
The cannabinoid may even ease the discomfort of social anxiety as well. In a 2011 study, researchers recruited 10 patients with social anxiety. The patients had not yet received any medical treatments for their disorder.
Patients were given either 400 mg of CBD or a placebo in a double-blind experiment. The CBD treatment successfully improved subjective anxiety symptoms when compared to a placebo.

Join or Create a CBD Focus Group near you…

…CBD Awareness has risen & Active consumers are on the rise… 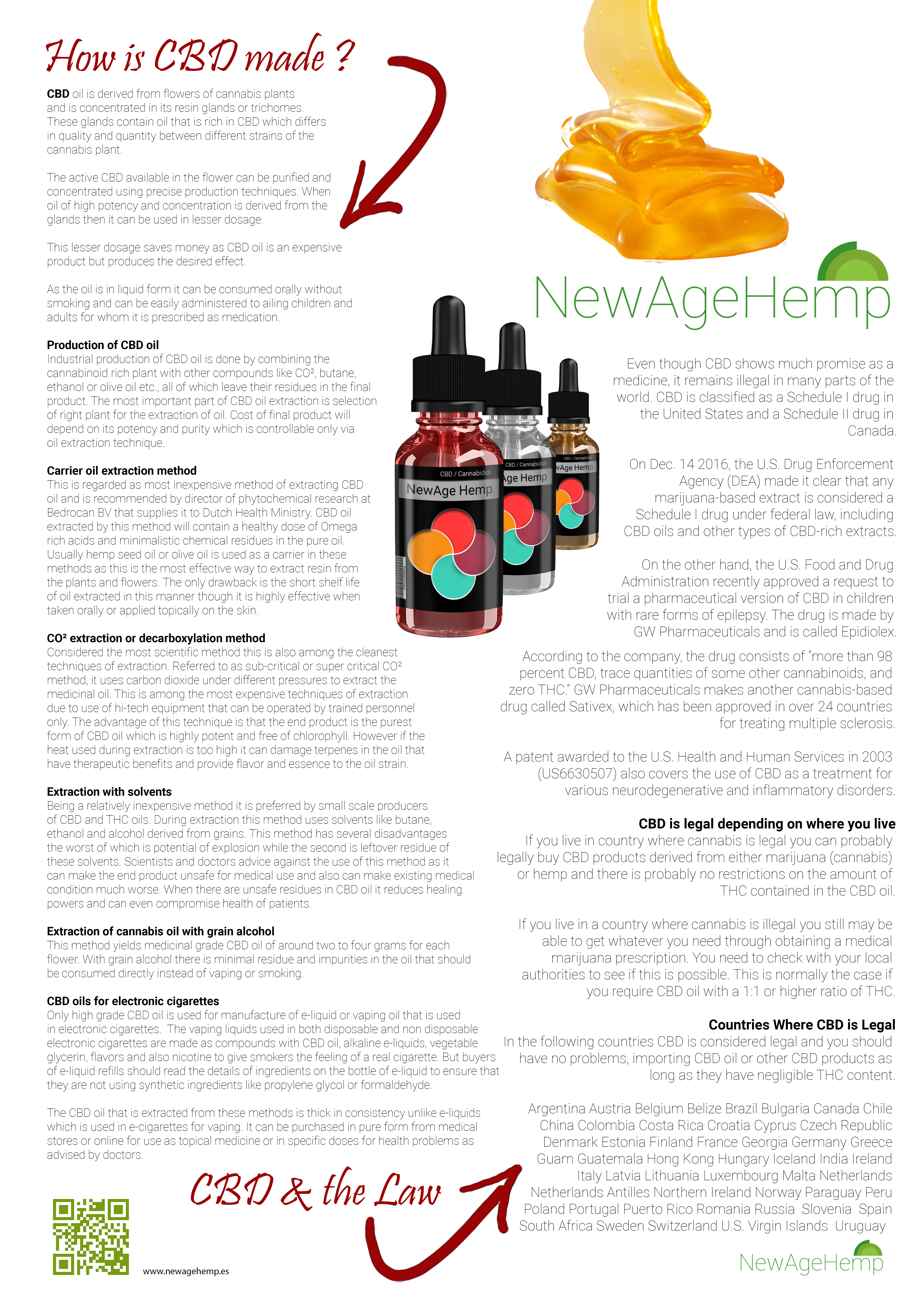 Read more CBD Stories from around the world …

By continuing to use the site, you agree to the use of cookies. more information